Filipinos most likely to be staying home

As lockdown restrictions slowly ease up across ASEAN, latest YouGov data in partnership with the Institute of Global Health Innovation (IGHI) at Imperial College London looks at how six ASEAN nations are returning to the ‘new normal’ – Singapore, Malaysia, Indonesia, Thailand, the Philippines and Vietnam.

Singaporeans are the least likely in ASEAN to return to their offices or respective workplaces in the next week, with over half (55%) of employed people saying they will not be working outside their homes in the next seven days. This could be due to the Singaporean Ministry of Trade and Industry guidelines that state that employees should only return to the workplace where it is demonstrably necessary. Filipinos are the second least likely to be back at the office, with over two in five (45%) saying they will continue working from home. This is followed by Malaysia (31%), Indonesia (24%) and Vietnam (22%). Thais are the most likely to be back at the office, with only two in ten (19%) saying that will be working from home in the next week. Thailand has ended lockdown completely as of last week. 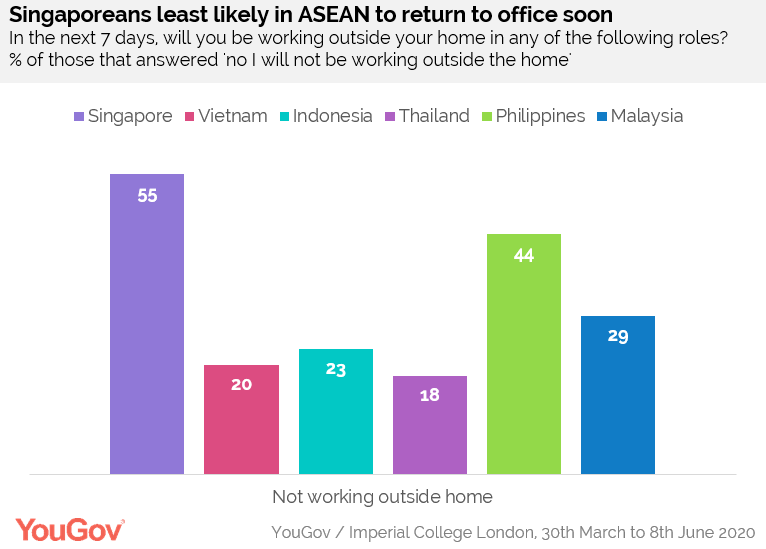 Vietnam has one of the lowest cases of COVID-19 in ASEAN. This is reflected in the data, showing that the Vietnamese are the least likely to stay home, with only over one in ten (12%) saying they did not leave the house the day before. This is followed by Thais (15%) and Indonesians (18%). Over a third (35%) of Singaporeans did not leave the house and almost two in five (39%) Malaysians. Singapore is now in Phase 2 of their ‘circuit breaker’ measures, seeing most business activities resume and Malaysia is now under the Restricted Movement Control Order (RMCO), which most notably allows for freedom of movement within the country. The Philippines recently saw a record high of cases, and Filipinos remain the most likely to remain home, with almost half (45%) not leaving the house the day before.

Methodology: The data is based on the interviews of 36,191 adults aged 18 and over across Singapore, Malaysia, Indonesia, Thailand, the Philippines and Vietnam. This survey was conducted by YouGov/Imperial College London fielded between 30th March 2020 to 22nd June 2020. All interviews were conducted online and results have been weighted to be nationally representative.