What is your favorite color? It’s one of the earliest questions children learn to answer. Color is said to influence our moods, eating habits – even who we date. It is also closely tied to national and political identity.

Yet a new YouGov survey conducted in 10 countries across four continents shows that one color – blue – is the most popular across the board. Between 23% (in Indonesia) and 33% (in Great Britain) like blue most out of the colors listed, putting it 8-18 points ahead of any other colour. 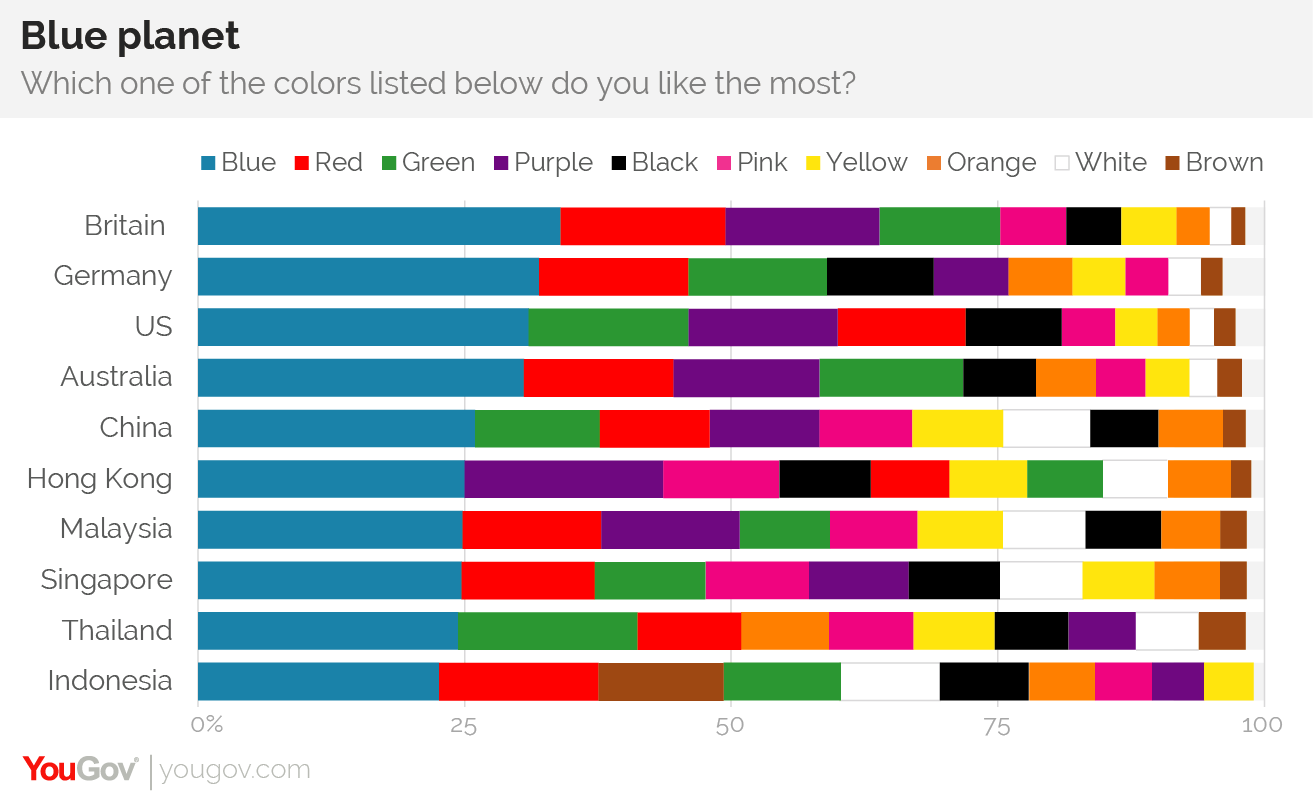 The second-most popular color varies more from place to place, though it's always one of three other options: green (second in Thailand, China and the United States), red (in Indonesia, Singapore, Germany and Britain), or purple (in Hong Kong). In Malaysia and Australia red and purple tied for second.

Blue wins even in places like China, where colors like red, yellow and green are considered to be especially auspicious or lucky (though the distinction between blue and green found in English is a more modern development for the Chinese language).

The preference also filters through to different demographic groups within the countries surveyed.

Though blue tends to be more popular with men than women (in the United States, the split was 40% to 24%; in Britain 40% to 27%), women still tend to pick blue more often than any other color. Pink was, unsurprisingly, much more popular with women than men, but even among women it was preferred by only around 10-13% and was not usually any more popular than red, purple or green.

Blue is also the winner across age groups and, in the United States, where respondents are broken down into racial subgroups, blue is preferred by roughly equal numbers of whites (30%), blacks (35%) and Hispanics (35%).

Perhaps more surprisingly for a country often described as a collection of red (Republican) and blue (Democratic) states, US Democrats and Republicans are about as likely as each other to prefer blue (33% for Democrats and 29% for Republicans). However, 17% of Republicans like red – twice the number of Democrats who do (8%).

The surveys were carried out by YouGov UK, YouGov Germany, YouGov America and YouGov Asia Pacific.See the full GB and US results.